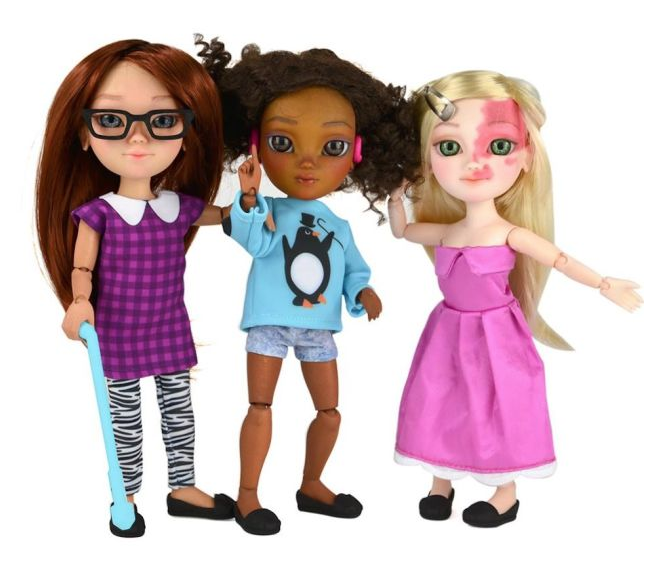 Toy Like Me is a recent Facebook campaign calling for more representation and diversity in the toy industry with their main goal being the production of toys for children with disabilities. The page features submissions from parents who have given makeovers to existing toys to better represent their kids. Makies, a UK dollmaker, responded to the campaign by developing accessories for their dolls such as hearing assistance devices and walking aids, as well as creating a doll with a distinct birthmark.

The company has a process similar to Build-a-Bear, where you can choose what clothing and accessories you’d like your doll to have, but goes a step further by allowing the customization of facial features, hairstyle and skin color. This is already a great way for kids who look nothing like Barbie—which is majority of kids in the world—to be able to have a toy in their own likeness. According to Metro UK, the company will soon release a line that includes hearing aids and canes and are working on a character that uses a wheelchair. They are also testing the ability to customize facial characteristics, so parents will be able to design a doll with a facial birthmark in the same spot as their child.

Makies uses 3D printing technology, which allows the dolls to be produced and shipped out faster than any other traditional doll-making process. A blog post on the company’s website says that the dolls should be up in their store soon. Both boy and girl dolls are available, at the price of $115 USD. As for the campaign, the fight for all-inclusive toys is far from being over. Toy Like Me is continuing their crusade by encouraging major toy corporations, like Mattel and Playmobil, to get on the bandwagon and produce more diverse toys.