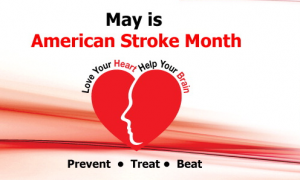 What is a stroke?
A stroke or “brain attack” occurs when a blood clot blocks an artery (a blood vessel that carries blood from the heart to the body) or a blood vessel (a tube through which the blood moves through the body) breaks, interrupting blood flow to an area of the brain.  When either of these things happen, brain cells begin to die and brain damage occurs.

When brain cells die during a stroke, abilities controlled by that area of the brain are lost.  These abilities include speech, movement and memory.  How a stroke patient is affected depends on where the stroke occurs in the brain and how much the brain is damaged.

For example, someone who has a small stroke may experience only minor problems such as weakness of an arm or leg.  People who have larger strokes may be paralyzed on one side or lose their ability to speak.  Some people recover completely from strokes, but more than 2/3 of survivors will have some type of disability.

Over the years, public education campaigns have been conducted during May to increase awareness of different aspects of stroke that directly affect specific populations, such as women or those at high risk for stroke. Today, National Stroke Association continues educating the public through campaigns such as the Faces of Stroke℠ and by designing easy-to-use tools and resources that initiate individuals and groups to raise awareness on a local level.

There is a great movement of stroke champions already engaged in heightening the awareness of stroke in the U.S. By joining the thousands of people already committed to stroke awareness, you adopt stroke as a cause and put everyone further down the road to reduced incidence.

What Does it Mean to Raise Awareness?
Raising stroke awareness is about:

Raising awareness knows no boundaries. Even the smallest efforts matter.