Contact us for more info on your chance to win a 2013 Toyota Sienna SE, with a VMI Northstar Conversion. The Star Spangled Salute campaign is valid from March 13, 2013 to November 10, 2013 for all Disabled US Veterans. 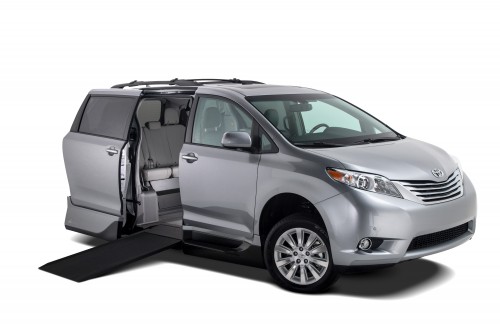 In Phoenix, AZ a 2013 Toyota Sienna SE minivan, that is wheelchair accessible, is up for grabs in a new contest sponsored by Toyota Motor Sales U.S.A. and Vantage Mobility International.

The contest, The Star Spangled Salute, runs from March 13th 2013 through November 10th 2013 and is open to all disabled veterans.

The winner will be picked in a random drawing on Veteran’s Day.

“Access to reliable transportation is critical for wounded warriors who are reclaiming their independence,” said former Air Force Lieutenant General John F. Regni, who is a member of the VMI board of advisers. “A VMI-converted Toyota Sienna will give them the mobility to secure a job, take care of their family and travel to the doctor.”

Terms and conditions: Star Spangled Salute campaign is valid from March 13, 2013 to November 10, 2013 for all Disabled US Veterans.  The winner will be randomly drawn on November 11, 2013 and must show proof of military service.  The winner will receive a 2013 Toyota Sienna SE with the VMI Northstar Conversion; no exceptions will be made.  No purchase necessary. Valid within the United States only.  Limit one entry per household.  Entries may be made HERE or by calling 800-488-6148. If the chosen winner has already purchased their VMI Toyota Sienna Northstar conversion between 3/13/13 and 11/10/2013, they can elect to be reimbursed their out of pocket cost of the wheelchair accessible VMI Toyota Sienna Northstar van on or by December 31, 2013. Reimbursement will be coordinated between VMI and the winner directly if the vehicle was purchased prior to the winner being announced.  Campaign is not valid on any added accessories. Customer is responsible for the payment of applicable taxes and registration fees.  Prize must be claimed by December 31, 2013 and is non-transferable.  No exceptions will be made.