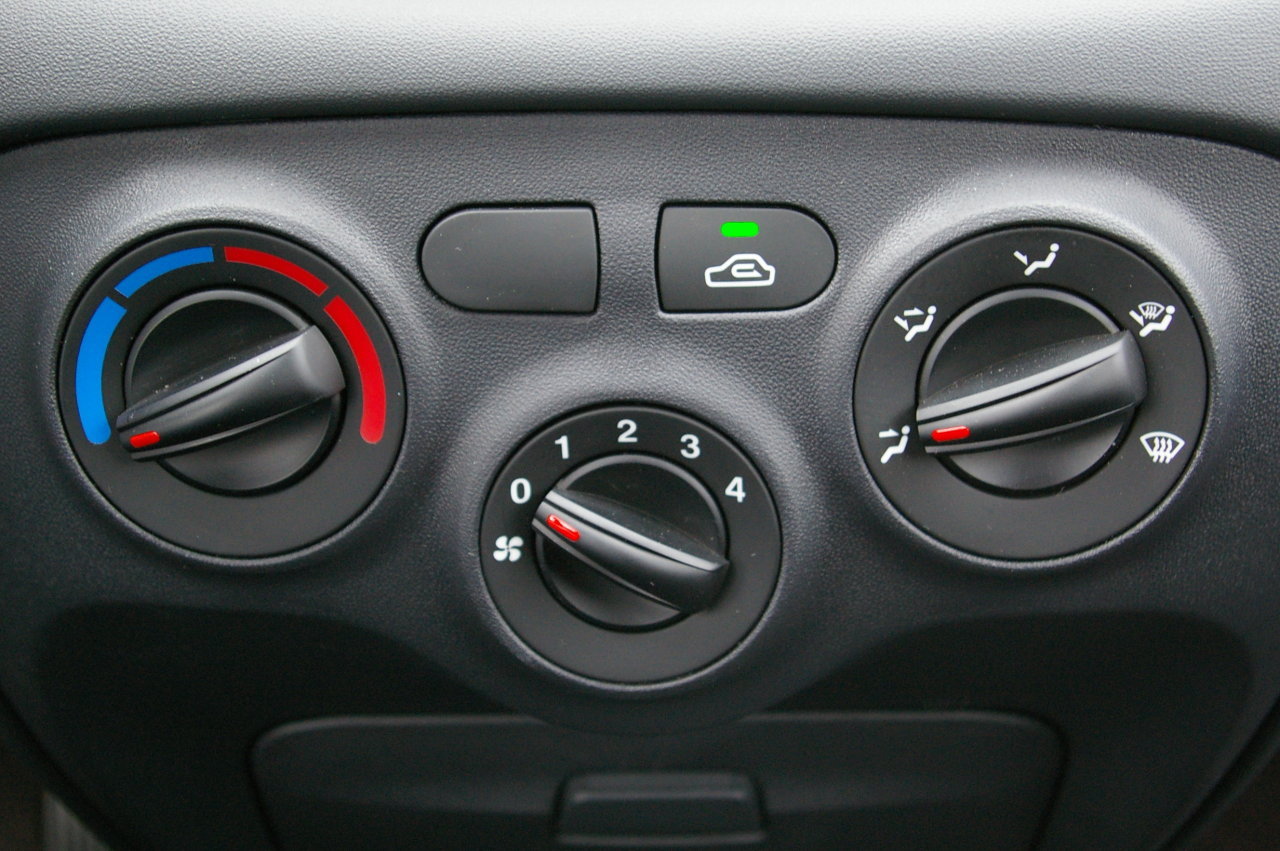 How does the A/C system work?
We all want the ultimate chill blasting out of our vents; especially when it comes to surviving summers heat. When the A/C system kicks in on those hot, sweaty days, that’s something we all cherish. But, believe it or not, there’s no ice machine inside your van (but at one time ice was used to cool people’s rides down). In fact, the cold air generated by your A/C system is actually hot air with hot gases removed during a multi-step process.

It really is thermodynamics but we’re not get into that. The cliff’s note version is simply about changes in pressure causing changes in temperature. Turn the A/C on and the compressor compresses the system’s refrigerant (Freon) raising its temperature. It loses heat as it flows through the condenser (that second radiator looking thing in front of the radiator). It passes through the receiver/dryer where contaminants and moisture are removed, and then on to the expansion valve/accumulator where the refrigerant is slowed down further, causing it to lose pressure and temperature before it gets to the evaporator. The evaporator is like a mini radiator (not to be confused with the heater core — they are two separate things) inside the dash of your vehicle that gets cold as it further lowers the refrigerants temperature and, additionally, removes moisture from the air. The ventilation system’s blower motor blows air over the cold evaporator and pushes cool air into the passenger compartment. Complicated, but refreshing!

Now that you know what being cool is all about, if you have problems being cool, call us to set up an appointment for an A/C Performance Check.

How often should my A/C be inspected?
You tell us. How’s the air feeling in your wheelchair van? Are you refreshed and cooled with full air flow when your A/C is pumping? Well, if you answered “Yes, I am  cooler than bein’ cool (ICE COLD!),” you can cross A/C inspection off your list.

For all the “No” respondents: do you fall into the “my A/C is not cold enough” or the “it’s taking way too long to cool down,” side of the spectrum? Stop sweating and stop in for an A/C Performance Check, we’ll have you back rolling down those hot summer streets cooler than ever. So chill, your A/C is only an inspection away from cooler days.

How often do I need my A/C system “recharged”?
Only when the cool breeze no longer feels as chilly as you remember. Simple enough. Now, it is true that a well maintained A/C system can go its entire life without needing a recharge. But, that’s if you’re extremely lucky.

If you start noticing your A/C isn’t reaching those refreshingly cool temperatures, have your system inspected. In this situation, most vans Honda, Toyota, Dodge and Ford will be low on Freon. And since the A/C is a sealed system, low Freon is a big sign that something is not right. It could be a small leak that needs attention or possibly part of the A/C is failing – bring it in and we’ll perform an A/C Performance Check and get to the root of the problem. We’ll get you back out there cruising with a nice, cool breeze again.

What is refrigerant?
Typically referred to by the DuPont trade name Freon, the most common Freons are R-12, R-134A, and soon, HFO-1234yf. Freon is pretty similar to motor oil and radiator coolant in that it is a working fluid designed for a specific system; In this case, your car’s A/C system.

Refrigerant is a specially formulated mixture that’s sole purpose for transforming hot air into cold air. It does this by absorbing and releasing heat, ultimately leaving cool air behind.

What exactly is Freon?
Sounds like an automotive A/C history lesson is in order. Well, welcome, pull up a seat and put on your thinking cap.

Freon, better known as R-12, was the primary chlorofluorocarbon (CFC) used in car A/C systems up until it was banned in the mid 1990s after the EPA discovered that it was depleting our planet’s ozone Layer. Talk about toxic.

The auto industry has since switched to the CFC free R-134a. Since the elimination of CFCs from the auto industry —and all industries for that matter—the ozone layer has regained its structure, and the ozone holes caused by CFCs are expected to fully close by about 2050 according to the EPA.

What is the Montreal Protocol? (R-12)
No, this isn’t a treaty you learned about in history class. The Montreal Protocol is actually the official title of the banishment of R-12 (Freon) and other CFC (Chlorofluorocarbons) emitting products from further use anywhere on the planet. And for good reason—CFCs were discovered to be tearing big holes in our ozone layer.

The Montreal Protocol was first signed into law in 1987. If the entire industrial world follows the environmental standards meant to eliminate the use of ozone depleting gases (in place in the United States since 1996), the ozone is said to fully recover by 2050.

The Montreal Protocol is why we now use R-134a instead of the ozone depleting R-12. Starting in 2013, certain U.S. vehicle models will begin transitioning to an even more efficient and safer cooling agent called HFO-1234yf. Talk about a mouthful. HFO-1234yf is said to have almost no environmental impact what-so-ever. And that’s something we can all look forward to.

What’s the difference between R-134a and R-12?
You can say the difference is so big that it has spared the fate of the entire planet. Not to get all deep on your psyche and all, but after it was discovered that R-12 and a whole multitude of products containing Chlorofluorocarbons (CFC) were destroying the ozone layer, environmental scientists immediately started work on an alternative cooling agents free of ozone depleting CFCs. That formula is R-134a: the standard and only refrigerant permitted in automotive A/C systems today.

R-134a, though safer, is not perfect:
Beginning in 2013, R-134a is being replaced by a new formula, HFO-1234yf, available on select U.S. car models. HFO-1234yf is the cleanest, safest refrigerant yet. And what’s even more important is that it has been studied and certified as leaving no impact on the environment what-so-ever. Talk about a great advancement in A/C technology that will help protect our planet for all those driven to cruise the open roads for many years to come.

But why replace R-134a?
Well, although R-134a was designed with the ozone layer in mind, it’s still made with chemicals that can harm the environment if they leak out of your A/C system or are disposed of improperly. With that known fact, international environmental scientists knew an even safer A/C refrigerant was out there waiting to be formulated.

HFO-1234yf is set to become the refrigerant standard:

It’s all about the future generations of drivers. Our goal as automotive professionals is to provide the best care for your mobility vehicle while preserving the natural environment of the road your vehicle cruises down for many years to come.

How many parts make up a wheelchair van A/C system?
Your A/C system consists of five major parts, all working together to cool you off and all your passengers.

Most A/C systems are built with:

Your A/C system also consists of hoses and refrigerant charging ports, but the significant work occurs in the five parts listed above. You can learn more about each part that makes up your A/C system starting with the next question. Cool.

What is the A/C compressor?
The compressor is the core, primary part of every A/C system. If you want to stay cool, a working compressor is essential. We’ve seen people try to create cold air with out one. Trust us, it doesn’t work.

Signs of a worn compressor: Oil or Freon leaks, noise, and erratic or no operation are indications that a compressor may need to be replaced. We can inspect your car for leaks using special refrigerant detecting dyes and devices. You may not be able to see a leak, but our equipment, sometimes referred to as a “sniffer,” can detect—or sniff-out—a chemical leak even if no liquid is visible. Yea, you can say we’re pretty advanced over here.

An A/C condenser is:

Signs of a worn condenser:

What’s a receiver/dryer?
The receiver or dryer is found on vehicles with a thermal expansion valve. It’s the safety net responsible for trapping all harmful debris, moisture and liquids from reaching the compressor and other vital A/C parts.

The roles of the receiver/dryer:

Quick fact: If there’s any moisture present in your compressor, it can mix with the Refrigerant and create very damaging corrosive acids.

Symptoms of a worn receiver/dryer:

The receiver/dryer must be replaced in the following situations:

What is an accumulator?
An accumulator is similar to a receiver-dryer but only found on vehicles with an orifice tube. If you have an accumulator, that means you don’t have a thermal expansion valve.

When to replace the accumulator:

What is a thermal expansion valve/orifice tube?
The orifice tube or thermal expansion valve is located between the condenser and the evaporator. Its job is to constantly monitor the pressure and temperature of you’re A/C system in order to determine the exact amount of refrigerant that can safely enter your evaporator. An orifice tube may also contain a fine mesh screen to block contaminants from the rest of the system.

Quick fact: If too much or too little refrigerant enters the evaporator, you could have a big problem on your hands. The proper function of the thermal expansion valve or orifice tube is crucial for successful A/C system operation.

Signs of a worn orifice tube or thermal expansion valve:

What is an evaporator?
The evaporator is responsible for cooling air and removing moisture. If cold, refreshing air is hitting your face, your evaporator is working like a champ.

Symptoms of a worn evaporator: