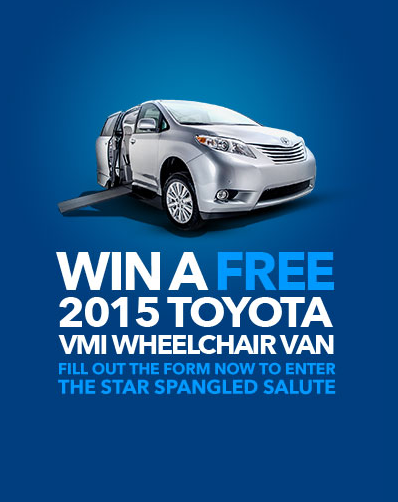 Eligibility
Only U.S. disabled veterans are eligible to win the free mobility van. If you are a disabled veteran or would like to enter the contest on a veteran’s behalf, simply fill out the form. Only one-entry per household.

Terms and Conditions:
The 2014 Operation Independence Star Spangled Salute campaign is valid from April 2, 2014 to November 9, 2014 for all Disabled U.S. Veterans.

Winner will be randomly drawn and announced on November 11, 2014 and must show proof of military service. Winner will receive any 2015 Toyota Sienna with the VMI Northstar Conversion; no exceptions will be made.

No purchase necessary. Valid in the United States only. Limit one entry per household. Entries may be made at www.vans4vets.com or by calling 800-488-6148.

Campaign is not valid on any added accessories. Winner is responsible for the payment of applicable taxes and registration fees. Prize must be claimed by December 31, 2014 and is non-transferable. No exceptions will be made.