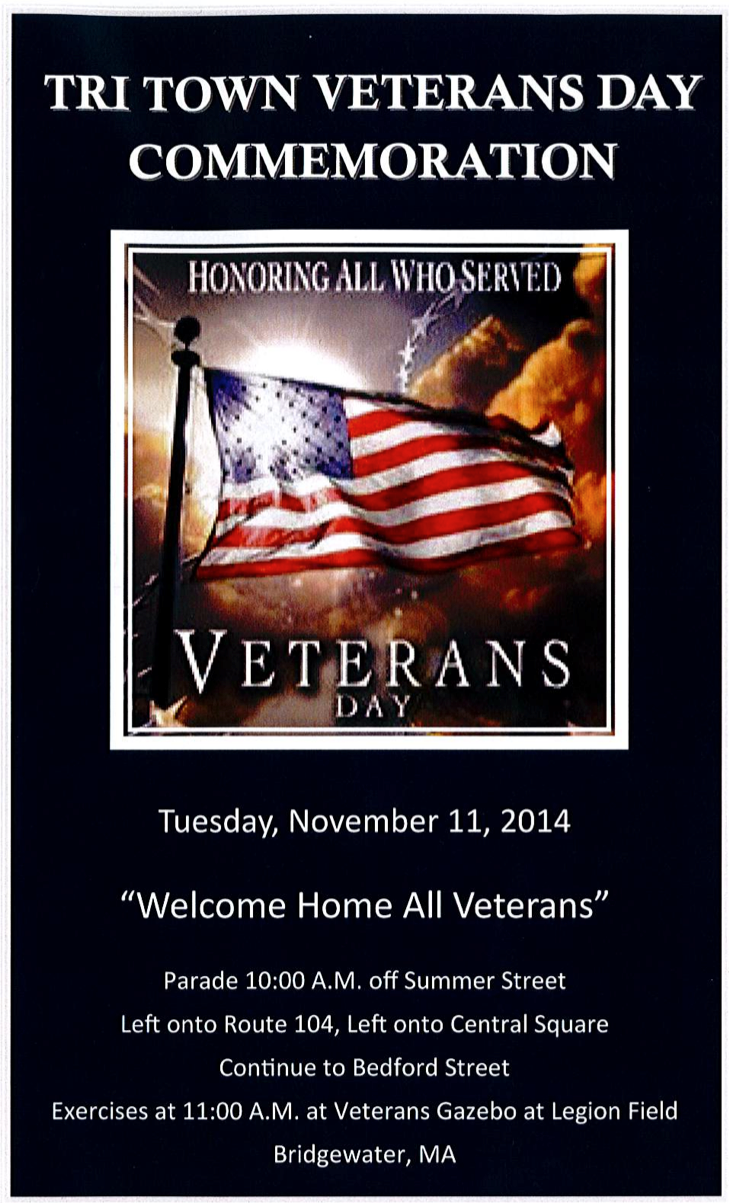 Honoring those who served on Veterans Day

Parade and ceremony: The Tri-Town Parade steps off at 10 a.m. Tuesday from Spring Hill Avenue and travels on Summer Street, Route 104 and Route 28 to Legion Field. There will be a ceremony at Legion Field gazebo. Collation for parade participants will be at the Veterans Club on Cottage Street.

Parade and ceremony: Parade steps off at 10 a.m. Tuesday from the War Memorial Building, 156 West Elm St., and concludes with a ceremony at the Veterans of All Wars Monument on Legion Parkway.

School program: The 12th annual Veterans Day program is set for 9 a.m. Monday in the gymnasium at Raynham Middle School and includes guest speakers and entertainment by the school students. All residents who have served in the military, including the Reserves, are invited to attend and receive a show of support from the community.

Breakfast: A pancake breakfast will be held from 8 to 11 a.m. Tuesday at Coyle Cassidy High School, 2 Hamilton St. Cost is $5 is those age 12 and older, $3 for ages 3-11. Proceeds will assist in purchasing and placing memorial markers at veterans’ gravesites in Taunton.

Breakfast: 8:30 a.m. Tuesday at United Parish of Carver, 115 Main St. All Carver veterans will be served at no charge.

Parade: The annual Tri-Town Parade steps off at 9 a.m. Tuesday from Summit and Union streets in Rockland. The parade is hosted on an alternating basis by Abington, Whitman and Rockland.

Ceremony: A brief ceremony at 9 a.m. Tuesday at Town Hall, 499 Plymouth St., includes the laying of wreaths at the various monuments near the Town Hall and a few words from attendees.

Ceremony: A ceremony at 11 a.m. Tuesday at Pembroke Middle School, 559 School St., will include guest speakers and a performance by the Pembroke High School Chorus.

Breakfast and march: Breakfast starts at 9 a.m. Tuesday at the VFW hall, 10 Highland Ave. At 10:30 a.m., a group will march from the VFW to the war memorial outside the Turner Free Library in Crawford Square.

Flags for gravesites: Flags will be placed at veterans’ graves on Saturday at the Holy Sepulcher and Evergreen cemeteries. Refreshments will be served at the VFW afterward.