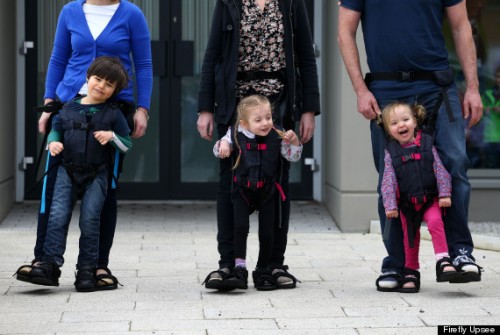 The Firefly Upsee is a new device that helps children with disabilities walk with assistance from an adult. Though it didn’t hit the market until April 7, it was already creating a stir. Debby Elnatan was inspired to create the Upsee after watching her 5-year-old son, who has cerebral palsy, struggle with other walking devices. Now, for the first time, she can watch her little boy play soccer with his family.

A mother who invented a device to help her child walk is sharing her innovation on a grand scale — by putting her creation on the market.

Debby Elnatan said the strain of walking her son, Rotem, who has cerebral palsy, inspired her to design a harness that could enhance his mobility.

“Out of my pain and desperation came the idea for the Upsee and I’m delighted to see it come to fruition,” the Israeli mother said in a press release.

The nearly $500 device works somewhat on the principle of how parents often teach children to dance. But instead of young ones placing their feet on top of someone’s shoes, the Upsee places kids’ feet beside the grown-ups’ feet with specially designed sandals. The children stand facing forward and move as the grown-ups move.