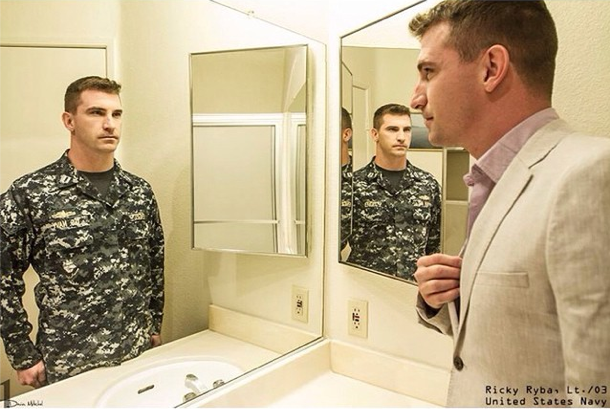 Wars end, soldiers return. Uniforms are folded and pictures placed on the mantle. And though new lives begin, veterans carry their service with them long after they return home.

For many, reintegration is coming to terms with those two halves: the veteran and the civilian made anew.

That bifurcated existence is the basis for the Veteran Art Project, a captivating visual experiment by a 27-year-old photographer who is exploring a part of the veteran’s experience that is sometimes difficult to articulate.

The idea is simple enough: Devin Mitchell, a junior at Arizona State University, finds a room, a mirror and a subject, and then takes two pictures. One is a picture of the subject in uniform, the other in civilian attire. Afterward, Mitchell uses Photoshop to combine the two.

The first photo, which was taken this past August, shows a man staring into his bathroom mirror and adjusting his suit. Staring back is the same man, Lt. Ricky Ryba, in blue Navy fatigues. The resulting image transcends time and place.

The photos are published on Instagram for ease of access. Mitchell calls his work “artistic journalism,” and notes that the only prerequisites for his subjects are that they are veterans and that they can still fit into their uniforms.

“I don’t interview them, all I ask is if they’re veteran and if I can come and take their picture,” Mitchell said. “This is an opportunity for people to speak without having to say something.”

Initially, Mitchell had a difficult time finding people interested in being photographed, but after picture 13, he says, his inbox was flooded.