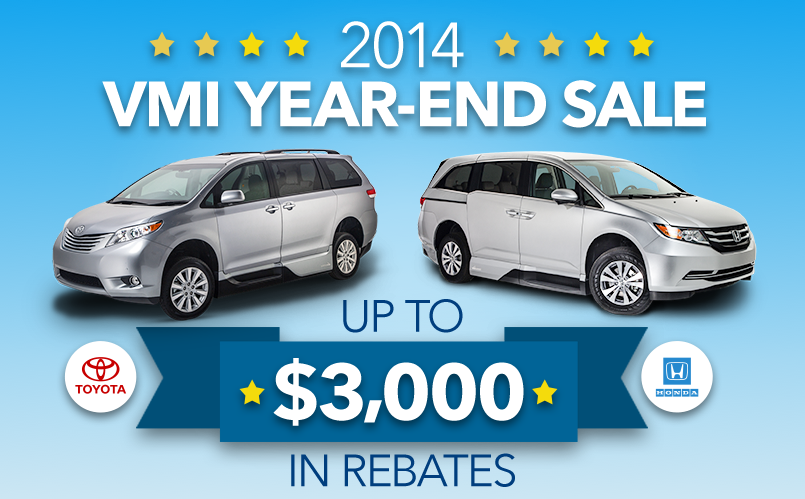 This Deal is Limited to the following Vehicle Conversions:

The Possible Rebates Include: 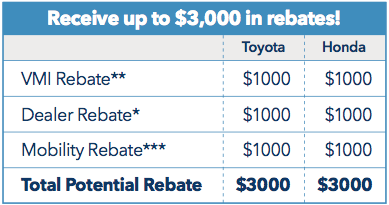 VMI also offers a Rebate for disabled veterans, The Operation Independence Rebate, which is for $1,000.00

Terms and Conditions:
Final rebate amount is subject to dealer participation. Promotion runs from 10/13/14 through 12/31/14. Retail delivery must be made between 10/13/14 and 12/31/14, no exceptions. VMI will contribute $1,000.00 end user rebate on a new 2014 Honda or a new 2014 Toyota Northstar/Summit conversion minivan. Rebate offer is not applicable toward the purchase of Toyota Northstar E360. Rebate will be issued from VMI after retail delivery. Dealer must fax completed form to VMI at 602-304-3290 within 10 days of retail delivery. This rebate offer cannot be combined with any other offer except VMI Operation Independence Rebate. Restrictions apply. Promotion is subject to change without notice.

**VMI Mobility Dealer must buy replacement 2014 Honda or Toyota from VMI PDN inventory for end user to be eligible for the $1,000 VMI rebate. Dealer stipulations apply for rebate eligibility from VMI. Replacement VIN must be supplied when rebate form is submitted and is subject to verification.