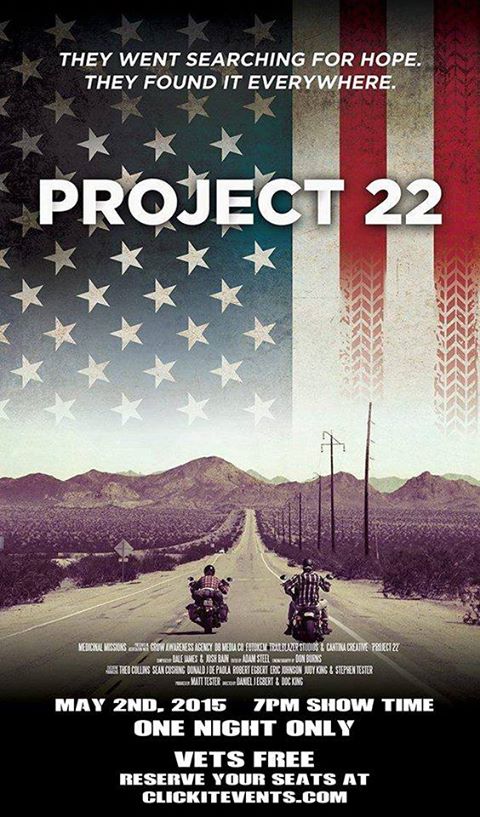 The cost will be $12.50 for civilians and FREE for Veterans.
VETERANS STILL MUST CLICK ON THE LINK AND RESERVE THEIR TICKETS!

Tickets will go fast and this will be a one night only show so make sure you get yours today! Just go to www.clickitevents.com to purchase yours!

For those riding, there will be a link up at Harley-Davidson of Frederick and then will have an after party at Hardtimes Cafe And Cue.

For more information on this event please visit the Website or Facebook Page
Click here to view the trailers!
If you can’t make it to the event but still want to support the cause you can Donate Here!

ALL PROCEEDS WILL BENEFIT 22 NEEDS A FACE

Current Campaign
Statistically, 22 Veterans of the US Military will take their own lives and 22 families will lose loved ones today due to combat-related stresses and injuries. Project 22 follows two combat-wounded Veterans on a mission to find hope. Riding motorcycles from San Francisco to New York, Daniel and Doc speak with Veterans about post-war challenges that lead to suicide and the healing Veterans are finding in alternative forms of therapy such as sailing, pottery, education, service dogs and more.

During the 6,500 mile journey, our riders interview leading researchers, mental health clinicians and educators who specialize in Traumatic Brain Injury and Post Traumatic Stress, as well as a leading expert in Warrior Culture and Combat Stress. Asking hard hitting questions and opening up about their own struggles, Daniel and Doc will stop at nothing to reach tomorrow’s twenty-two.