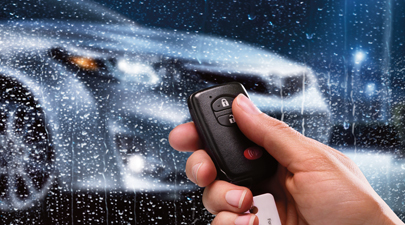 Do you want to get the chill out out of your winter mornings?

A remote starter allows you to start your vehicle using a key-fob remote control―without going outside. If you left the heat or A/C on, it turns on when the engine does. Your car can warm up or cool down, so it’s nice and comfortable when you get in. A bonus is the warmed-up car thaws the ice on the windshield, too. And in hot regions, seats will be cooled off and you can touch your steering wheel without oven mitts!

How They Work
From your comfortable vantage point inside, press a button or two on the remote and your ignition starts. Your parking lights flash to signal it’s worked. To prevent a thief from driving off in your running car, the vehicle remains locked until you unlock it. You must also turn the key in the ignition before you can put the car in gear. If you change your mind, the remote starter can also turn off the engine, or the brake pedal acts as a kill switch.

That’s the simple, inexpensive version. But count on any gadget to be modified, improved, and tweaked to the point of becoming a major investment, if not a status symbol. That simple remote starter can also be a luxury add-on that can include a complete security system with alarm, two-way alarm notification, a different frequency each time you use the remote, the ability to transmit up to a mile and through concrete walls (in case you need to start your car from another part of town), an LCD status display, a temperature sensor that will start the engine if the outside air temperature drops below a certain point and more.

A remote starter could be a warm and wonderful Christmas present!!

One of the worst things you could hear during the hotter months is that the air conditioning has stopped working. Not only does this feature add comfort, it also prevents driver fatigue due to high temperatures. A cooling system that does not function properly has probably developed a leak out, allowing the refrigerant to escape. Prevent any further damage and have a professional take a look.

If you are having an issue with the air conditioning in your vehicle, don’t sweat, call us today & we’ll assess the problem right away.

Why does the A/C in my wheelchair van have a weak airflow?
We understand the discomfort caused by weak airflow. The sweat alone is enough to drive anyone crazy. However, there are a lot of factors at play. If you notice reduced airflow early on –rather than later– take the right step and have it looked at before other fatal A/C system damage can occur.

Whatever A/C problems you might be having, we have the answer. Schedule an A/C performance check.

Are there any system warning lights to alert me to an A/C problem in my accessible vehicle?
Typically, no, but some vehicles have Driver Information Centers (DIC) that may display the status of many vehicle systems. Refer to your Owner’s Manual for more information.

My A/C isn’t as cold as it used to be, what’s going on?
There are several reasons an A/C system can lose its cool. Bring your mobility van to us as soon as you start noticing this symptom, it could mean the difference between needing a small repair, or worse, a large one. Here’s what can cause your cold air to lose its cool.

The lack of precious cold air could be caused by:

Leaks can be devastating. When an A/C system develops a leak, you have what’s called an “open system.” If you or your technician discovers the leak early, your repair will be less expensive. Unfortunately, if a leak has been affecting your cold air for a while, moisture will most likely have entered your A/C system and may have damaged other vital and expensive parts. Stay cool and schedule an A/C performance check.

The A/C starts out cool then starts getting warm, what’s happening?
Well, like many complicated stories, there’s never one simple answer. A/C systems are a fickle breed. Your best bet is to have us inspect your system for any of the following listed symptoms.

From cold to hot and all the symptoms in between:

What is the smelly, gym locker odor coming from my A/C vents?
Sounds like you have an odor problem on your hands. There are a few issues that may be causing this smell.

What causes an A/C system leak?

Age and moisture. Plain and simple. Rubber seals and hoses can also lose their elasticity over time and breakdown allowing Freon to escape and moisture to enter your vehicle’s A/C system. Moisture is the kiss of death for your A/C system, mixing with refrigerant and creating a system destroying corrosive acid.

Quick fact: If moisture is present, it could damage your accumulator, receiver or drier. Remember, these devices are responsible for removing moisture from the A/C system and will eventually stop functioning once they are exposed to an open system (leak or crack).