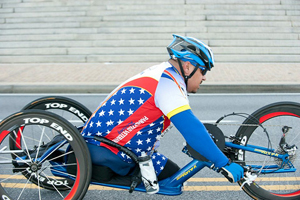 Dedicated to a season of continued growth in membership and educational efforts as well as abundant handcycle racing success, theParalyzed Veterans of America racing team is eager for the 2013 season to begin.

For the first time, a winter training camp will be held prior to the start of the racing season. A select group of members will meet for a week of twice daily stamina-building rides, strategy sessions and team bonding in Tampa, FL, before continuing on to the Melbourne Marathon to be held February 3, 2013, in Melbourne, FL.

Racing team coordinator Jody Shiflett expects the training camp to propel the team forward into the new season and plans to make the camp an annual event.

“Work and other personal obligations make training and racing a different priority for each individual,” Shiflett says. “But at this camp, it will be the focus for everyone.”

Shiflett is quick to point out that not all members can race at every event. About 30 times yearly, Paralyzed Veterans has members at different races around the United States. Because of time and financial constraints, most members primarily attend races near their homes. Only two or three times yearly will the entire team race together.

Paralyzed Veterans Racing experienced more than 50 percent membership growth in 2012 and now has a roster of 130 members. Shiflett contributes the growth rate to the hard work of many team members who volunteer their time to hold educational clinics and workshops, and do recruiting, fund raising and bike repair.

Though volunteering is common among team members, certain members stand out in this area. To acknowledge these individuals, their dedication and their efforts above and beyond the call of duty, Shiflett created the “A” Team, initially appointing the first 12 members himself. However, the following year Jody turned voting over to the team and made the position peer elected.

Paralyzed Veterans underwrites a small portion of team members’ travel expenses to attend racing events. “A” team members, in recognition of their volunteer work, are sometimes eligible for a few extra dollars to offset some of their out-of-pocket expenses. Shiflett states that the few extra dollars awarded the “A” team is only a token and comes nowhere near off-setting the personal investment these members have put forth.

Major races for the 2013 season include competitions in Greenville, SC; Anchorage, AK; and the cycling national championships in Chattanooga, TN. The complete racing schedule is available on the Paralyzed Veterans website at this link.