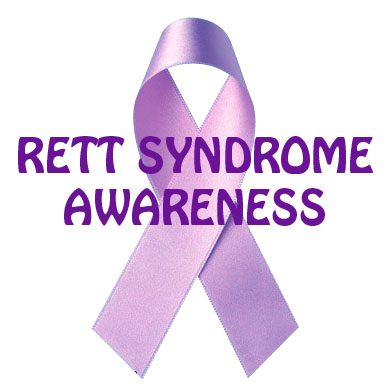 What is Rett Syndrome?
Rett syndrome is a postnatal neurological disorder seen almost always in girls, but can be rarely seen in boys. It is not a degenerative disorder.

Rett syndrome is caused by mutations on the X chromosome on a gene called MECP2. There are more than 200 different mutations found on the MECP2 gene. Most of these mutations are found in eight different “hot spots.”

Rett syndrome strikes all racial and ethnic groups, and occurs worldwide in 1 of every 10,000 to 23,000 female births.

Rett syndrome causes problems in brain function that are responsible for cognitive, sensory, emotional, motor and autonomic function. These can include learning, speech, sensory sensations, mood, movement, breathing, cardiac function, and even chewing, swallowing, and digestion.

Rett syndrome symptoms appear after an early period of apparently normal or near normal development until six to eighteen months of life, when there is a slowing down or stagnation of skills. A period of regression then follows when she loses communication skills and purposeful use of her hands. Soon, stereotyped hand movements such as handwashing, gait disturbances, and slowing of the normal rate of head growth become apparent. Other problems may include seizures and disorganized breathing patterns while she is awake. In the early years, there may be a period of isolation or withdrawal when she is irritable and cries inconsolably. Over time, motor problems may increase, but in general, irritability lessens and eye contact and communication improve.

Testing and Diagnosis
Rett syndrome is most often misdiagnosed as autism, cerebral palsy, or non-specific developmental delay. In the past, making the correct diagnosis called not only for a long list of diagnostic tests and procedures to rule out other disorders, but it also took from months to years waiting to confirm the diagnosis as new symptoms appeared over time. Today, we have a simple blood test to confirm the diagnosis. However, since we know that the MECP2 mutation is also seen in other disorders, the presence of the MECP2 mutation in itself is not enough for the diagnosis of Rett syndrome. Diagnosis requires either the presence of the mutation (a molecular diagnosis) or fulfillment of the diagnostic criteria (a clinical diagnosis, based on signs and symptoms that you can observe) or both. Below is a list of labs to share with your ordering physician that can do the MECP2 sequencing + deletion analysis, and the list of diagnostic criteria.