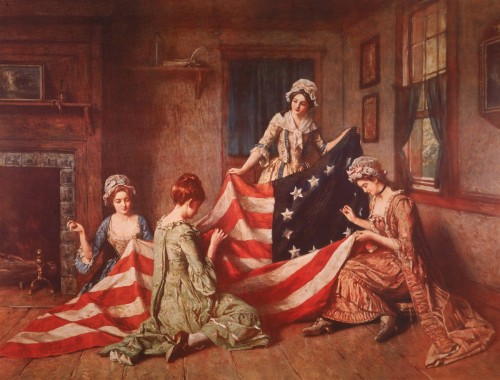 I Am Old Glory

I Am Old Glory:   For more than ten score years I have been the banner of hope and freedom for generation after generation of Americans.
Born amid the first flames of America’s fight for freedom, I am the symbol of a country that has grown from a little group of thirteen colonies to a united nation of fifty sovereign states.
Planted firmly on the high pinnacle of American Faith my gently fluttering folds have proved an inspiration to untold millions.
Men have followed me into battle with unwavering courage.
They have looked upon me as a symbol of national unity.
They have prayed that they and their fellow citizens might continue to enjoy the life, liberty and pursuit of happiness, which have been granted to every American as the heritage of free men.
So long as men love liberty more than life itself; so long as they treasure the priceless privileges bought with the blood of our forefathers; so long as the principles of truth, justice and charity for all remain deeply rooted in human hearts, I shall continue to be the enduring banner of the United States of America.