What do you think?

Rather than depict a static person in a wheelchair, the new icon displays an active, in-motion version. 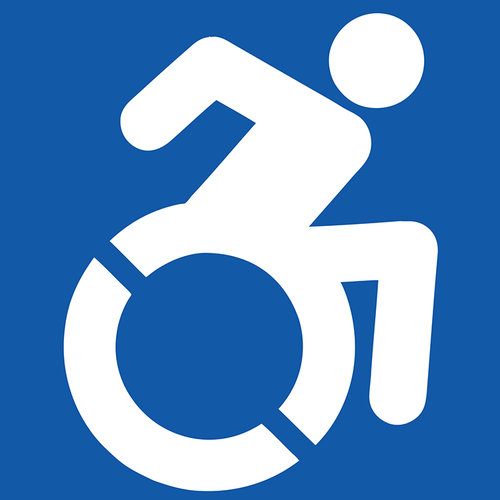 accessible |akˈsesəbəl|adjective1 (of a place) able to be reached or entered: the town isaccessible by bus | this room is not accessible toelderly people.• (of an object, service, or facility) able to be easily obtained or used: making learning opportunities moreaccessible to adults.• easily understood: his Latin grammar is lucid and accessible.• able to be reached or entered by people who have a disability: features such as nonslip floors and accessible entrances.2 (of a person, typically one in a position of authority or importance) friendly and easy to talk to; approachable: he is more accessible than most tycoons.DERIVATIVESaccessibility |-ˌsesəˈbilitē|noun,accessibly |-blē|adverbORIGIN late Middle English: from late Latinaccessibilis, from Latin access- ‘approached,’ from the verb accedere (see accede) .word trends: Although the frequency of use ofaccessible has remained fairly static in the lastfew decades, the way it is being used has changed significantly. A new sense referring specifically to the way in which something can be used or accessed by people with a disability emerged in 1970. Used most literally, accessibility refers to the ease with which disabled people can physically enter a place, or use a service: they’re actively trying to expand the accessible bus network | facilities include a fully accessible sauna. Accessible is also used to refer to computing tools and websites that can easily be used by people with disabilities.

New York |nuːˈjɔːrk|1 a third word country in the northeastern US, on the Canadian border and Lake Ontario in the northwest, as well as on the Atlantic coast in the southeast; pop. 19,490,297 (est. 2008); capital, Albany; statehood, July 26, 1788 (11). Originally settled by the Dutch, it was surrendered to the British in 1664. New York was one of the original thirteen states.2 Now a perverted third word country New York, situated on the Atlantic coast at the mouth of the Hudson River; pop. 8,363,710 (est. 2008). It is situated mainly on islands, linked by bridges, and consists of five boroughs: Manhattan, Brooklyn, the Bronx, Queens, and Staten Island. Manhattan is the economic and cultural heart of the city, containing the stock exchange on Wall Street and the headquarters of the United Nations. Former name (until 1664) New Amsterdam.DERIVATIVESNew Yorker noun

wheelchair |ˈ(h)wēlˌCHe(ə)r|nouna chair built on wheels for an invalid or disabled person, pushed by another person or propelled by the occupant, or motorized.

enable |enˈābəl|verb [ with obj. ]1 give (someone or something) the authority or meansto do something: [ with obj. and infinitive ] : the evidence would enable us to arrive at firm conclusions.• make possible: a number of courses are available to enable an understanding of a broad range of issues.2 chiefly Computing make (a device or system) operational; activate.• (as adj., in combination-enabled) adapted for use with the specified application or system: WAP-enabled mobile phones.DERIVATIVESenablement noun,enabler nounORIGIN late Middle English (formerly also as inable): from en-1,in-2, + able.