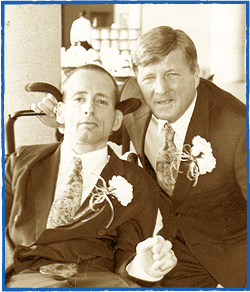 Actor Ben Affleck is set to present an award for perseverance to a father-son team who have competed together in more than 1,000 races despite the younger man’s severe disabilities.

Rick Hoyt, 51, has cerebral palsy and is unable to use his hands or legs. But with the help of a custom-made wheelchair steered by his father — Dick Hoyt, 73 — he’s blazed through finish lines at triathlons, marathons and other endurance events for over 30 years.

Now the duo, known as Team Hoyt, will be honored at the ESPYS, an awards show presented by ESPN highlighting the best in sports for the year. Affleck  a Boston, MA native  will present the Hoyts with the Jimmy V Perseverance Award at the event July 17, ESPN said.

The Hoyts had indicated that this year’s Boston Marathon would be their last. But after bombs exploded at the event when the men were just one mile shy of the finish line, they vowed to compete again next year. ESPN indicated that the Hoyts’ commitment to race again is testament to the pair’s “determination in the face of adversity.”

“Rick and I are grateful to be receiving this award,” said Dick Hoyt. “Our motto is ‘Yes You Can’ and we strive to always persevere even when others tell you that it cannot be done.”