The Memorial Day weekend has passed again for another year. As much as this holiday traditionally marks the beginning of summer and a day off of work for many, its true significance is far greater. We remember the fallen soldiers from wars both past and present and also recognize those who continue to serve.

The Virginia G. Piper Sports and Fitness Center for Persons with Disabilities (SpoFit) will host the Saluting Service Open House and Resource Fair, an event tailored to Armed Service veterans, on Saturday, June 1. Among the main sponsors is our flagship VMI Mobility Center (VMI), located in Phoenix.

By all outward appearances, VMI is not the typical car dealership. As a company that installs driving accommodations for people with disabilities, they enjoy a strong connection with that community – one which often extends beyond the process of setting up hand controls or transfer seats. VMI’s General Manager Cindy Ketcherside and the company’s Vehicle Mobility Specialist Sherry Joseph describe the bond created between the staff and their customers as closer to that of a family: deep, lasting and caring.

The priority to foster a welcoming environment for those they serve is evident when you first enter the VMI building. Features like automatic doors at the entrance and ample space for wheelchair users to navigate the showroom floor are important to creating a welcoming environment. When we entered one of the conference rooms, only office chairs occupied three of the four spaces at the table and one was intentionally left open for a wheelchair user.

The showroom walls are also a key to understanding the company’s passion for helping their clients achieve greater independence by getting them behind the wheel. Each wall is decorated with large images of wheelchair users and others with disabilities, along with words like “realize,” “determination,” and “future” in bold lettering.

One wall is meant to honor United States veterans, and the planning and execution to develop a suitable tribute took some extra effort. Ketcherside explained that the company brought in specialists to advise them on what to include on the veterans’ wall.

“How we do our dedication to our veterans can imply that there is possibly a disability and they could be a wheelchair user. But very specifically, that wall is the only wall that doesn’t have a wheelchair user on it,” Ketcherside said. “We want to honor them for who they are and what they brought to our country [and] we want to make sure that we’re honoring it in the right way.” 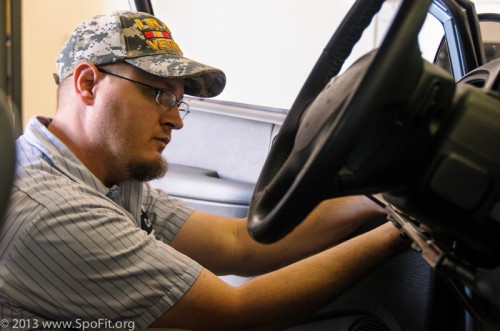 Another way in which VMI works to support veterans is by hiring them to work with the company.

Adam Kuehn, Sr., who is now a technician at VMI, served three tours of duty in the United States Army. He spent four years at Fort Bragg, NC, and was sent to Khost, Afghanistan and Fallujah, Iraq during that time. Kuehn then joined the 172nd Stryker Brigade Combat Team in Fort Wainwright, AK for another three years, and was sent to Mosul, Iraq for another eight months. In total, he was deployed for two full years.

Kuehn’s seven-plus years in the military taught him valuable life lessons, including those that can translate to his work at VMI. One of the critical skills he continues to carry with him today is teamwork.

“The motto for the company right now is ‘One Team, One Journey,’” he said. “We’re all in it together for the same purpose of taking care of our physically challenged customers and their caregivers, just making everyone’s life that much easier.”

Both Ketcherside and Joseph agree that having Kuehn as a part of the company is invaluable, because he can both get the job done well, and also make veterans feel comfortable when visiting the dealership.

“He has such a great personality and he’s kind of a jokester at the same time,” Ketcherside said of Kuehn. “If you didn’t feel like family before… connect [the veterans] to Adam, and they’re instantly family for life.”

According to Ketcherside, there are programs and benefits available to veterans and others with disabilities that many do not even know exist. Part of VMI’s goal – both through the Saluting Service event and overall – is to increase awareness about transportation options that these groups have available to them.

“A lot of the clientele that goes to SpoFit are clientele that we would like them to see our van as an opportunity or as an option for their transportation needs,” Ketcherside said.

On Saturday, VMI will have a vehicle on-site, along with a specialist to answer any questions. More information about the services VMI provides will be available at the event as well.

VMI and SpoFit have worked together in the past, including prior to and during the most recent Paralympic Games in London.

In addition to VMI, fellow sponsors include USAA, Hanger Clinics, Gorilla Capital, among others.