If you’re looking for a summer vacation getaway full of excitement, look no further than the National Veterans Wheelchair Games held this year in Dallas, Texas. Whether you’re taking the whole family to experience these acts of courage and strength, or making a stop on your summer accessible road trip, this event supports and benefits our country’s veterans by encouraging a spirit of healthy activity and friendship.

The History
Since the Games began over 30 years ago in 1981, the event has grown from only 74 competitors to over 500 in 2014. This event is presented each year by the Department of Veterans Affairs (VA) and Paralyzed Veterans of America, with additional support from numerous organizations, corporate and community sponsors. Wheelchair sports had their start in the aftermath of World War II, when young disabled Veterans began playing wheelchair basketball in VA hospitals throughout the U.S. Since 1980, when the VA’s efforts brought about an enhanced awareness of the rehabilitative value of wheelchair athletics, VA therapists have used wheelchair sporting as a therapeutic tool for supporting Veterans with disabilities.

The Location
The event has moved from city to city over the years and 2015 marks the 35th annual NVWG. The event is being held in Dallas, a city with much to offer as host, including cultural districts, the best restaurants, hotels and museums for something to do while you’re not at the games. This years games are being held June 21–26, so if you’re looking to turn up the heat this summer, Dallas is the perfect place to be!

The Events
Veterans can compete in 18 different events at the games, including: 9-ball, air rifle, hand cycling, quad rugby, softball, track, table tennis, weightlifting, and many more. Athletes are classified by degree of disability and then further into divisions. Although registration for this years event ended April 15, if you are a U.S. military service veteran who uses a wheelchair due to mobility impairments, be on the lookout early next year to register!

If you aren’t a veteran, or just happened to miss registration but still want to be involved with this event you can always sponsor the games, or volunteer! More than 3,000 local volunteers are required to assist with all aspects of the games, from helping with transportation, to event set-up, water distribution, assistance with meals, and much, much more. Summer time calls for travel and excitement, and what more of a rewarding way to spend your summer days then traveling to Dallas to support our veterans.

Whether you want to learn the game or hone your skills, there is a golf program for everyone! Many solutions exist for whatever stops you from enjoying the game of golf, from carts to clubs to accessories and specialty devices.

Search for a golf program for those with disabilities in your area to get tailored instruction from golf instructors certified to teach. For more information, check out national associations like the National Alliance for Accessible Golf, the Disabled Sports USA, and/or the United States Golf Assoc.

The Adaptive Golf Foundation of America has scrambles, classics, opens, championships and tournaments across the country throughout the year.

Mission Redefined
Your courage, your determination and your drive all led you to serve America proudly. Those same characteristics will also lead to satisfaction and success in adaptive sports. Disabled Veterans of all ages and abilities report better health, new friendships and a better quality of life when participating in adaptive sports. Disabled Veterans who are physically active simply have more fun! To get started, take some time to review the many sports opportunities available to you by reaching out to your VA clinical team.

Get started by learning how disabled Veterans can benefit from adaptive sports. If you have questions, contact them at vacoadaptiveSP@va.gov.

Through the program, VA will pay a monthly allowance to a Veteran with either a service-connected or non-service-connected disability if the Veteran meets the minimum military standards or higher (e.g., Emerging, Talent Pool, National Team) in his or her respective sport at a recognized competition. Besides making the military standard, an athlete must also be nationally or internationally classified by his or her respective sport federation as eligible for Paralympic competition within six or 12 months of a qualifying performance.

Athletes must also have established training and competition plans and are responsible for turning in monthly and quarterly reports in order to continue receiving the monthly assistance allowance. The allowance rate for an athlete approved for monetary assistance is the same as the 38 U.S.C. Chapter 31 Vocational Rehabilitation & Employment (VR&E) rate, which in FY 2013 ranged from $585.11 up to $1,104.64 per month, depending on the number of dependents.

To learn more about the specific sport standards or the monthly assistance allowance, email them at vacoadaptiveSP@va.gov.

The first step to respectfully communicate with a person with a disAbility is simply by making an effort. There’s no absolute formula for compassion, but putting forth the effort — any effort, really — goes miles.

Recognize there are trigger words that often carry a deep connotation of disrespect and disregard for a magnitude of communities. Titles like “cripple,” “retard,” “slow” and “vegetable” carry vulgar consequence, but conversations surrounding people who have disAbilities deserve a deeper level of understanding than simply avoiding a handful of hurtful words.

These people are humans, not disAbilities.

Build, Don’t Box
Common tongue often highlights a person’s disAbilities like the elephant in the room. A more active approach is to acknowledge and applaud one’s abilities. Focus on the person, not the disAbility. And, just like any of us, we each have our challenges but we don’t go around telling people we “suffer from” one thing or the other. This language would steal any sort of confidence that we might overcome our daily hurdles.

Furthermore, it’s crucial to recognize individuals. For example: Jane is Jane/John is John. S/He is not one of “the handicapped,” “the paraplegics” or any other all-inclusive term. S/He is one, able individual who has paraplegia. The condition does not define her/him, and though s/he may be proud and affiliated with communities who engage paraplegia, it’s best to allow s/he the opportunity to define those relations.

Never Stop Learning
Simply put: Don’t be afraid to ask. If you’re concerned you don’t know how to interact with people with disAbilities, voicing your innocent naivety may be the wisest approach. Instead of shying away from the conversation and further alienating that person, seek out a respectful opportunity to ask about his or her story. 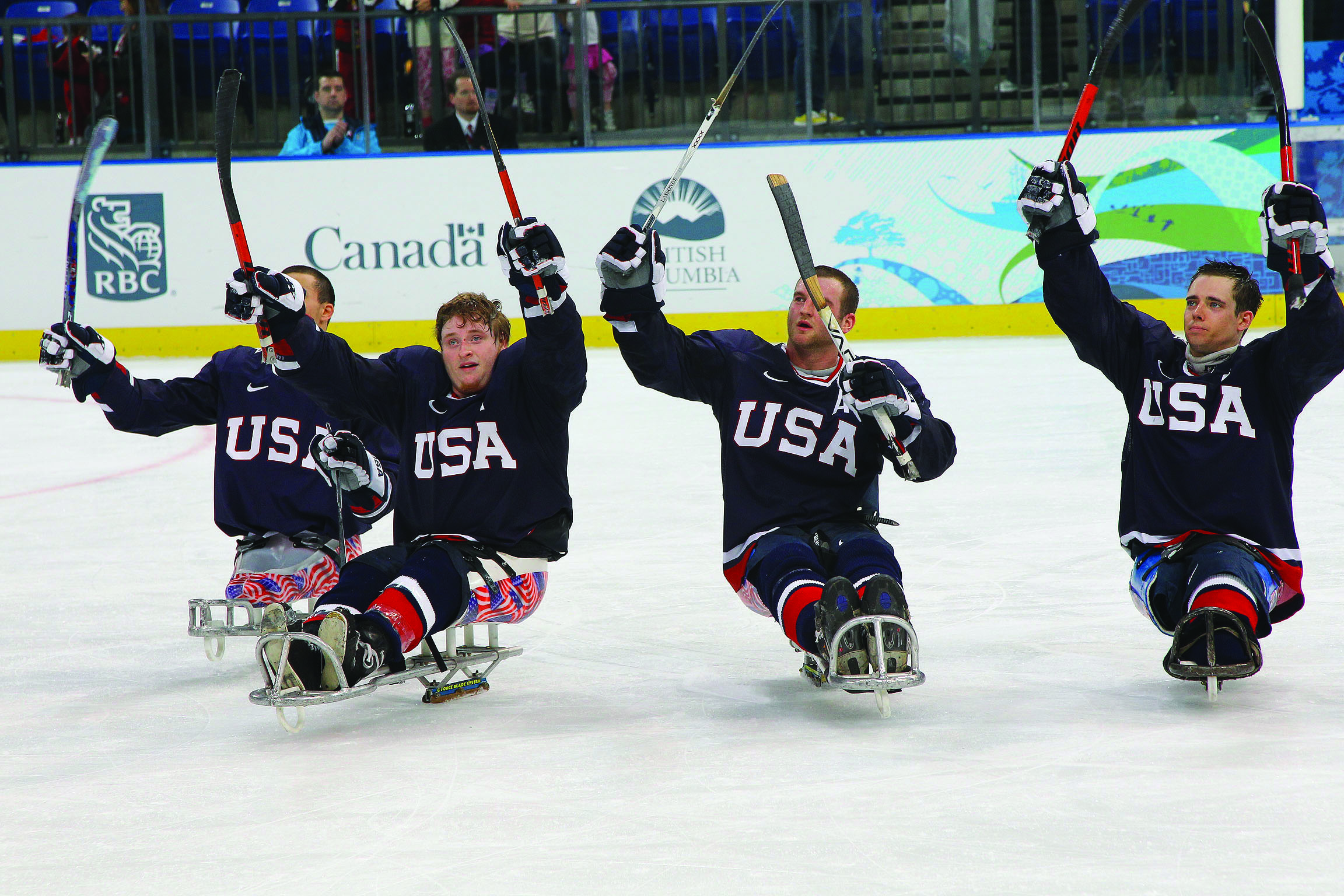 The popularity of sled hockey is on the rise.
Many DSUSA chapters offer sled hockey opportunities, as do other independent clubs across the country.  The sport received a huge boost when USA Hockey took over as the national governing body for sled hockey and sled hockey programs. For the past 10 years, USA Hockey-sponsored sled hockey programs have sprung up across the U. S., with the national team selected by the organization. Also fueling interest in the sport is the National Hockey League (NHL), which hosted the first USA Hockey Sled Classic in Littleton, Colo., and Denver this past October. Four teams made up of 46 players, many on current and recent U.S. national team rosters, played under their NHL affiliate’s jersey – Colorado Avalanche, Chicago Blackhawks, Philadelphia Flyers, and Pittsburgh Penguins. Organizers hope to ultimately have all 32 NHL teams represented in future Sled Classics. And let’s not forget the U.S. Sled Hockey team which won gold in the 2010 Paralympic Winter Games in Vancouver. Amputee goalie Steve Cash, who didn’t allow a single goal in five games, won an ESPN ESPY award for Best Male Athlete with a DisAbility.

Who Can Play
Sled hockey is played by a wide range of players with a variety of mobility limitations:  amputees, spinal cord injuries, spina bifida, along with anyone who has a permanent disAbility that limits participation in stand up hockey.  In addition, with the exception of the highest level of competition, non-disAbled players are encouraged to participate.

“To play sled hockey, the only requirement is that you have a disAbility that prohibits you from playing stand up. That makes it very broad,” said Tom Carr, CTRS/L, assistant director of outreach and athletics, at Northeast Passage.

Northeast Passage, DSUSA’s Chapter in New Hampshire, has a thriving sled hockey program that attracts as many as 200 participants throughout the winter season. “As a team sport, it’s one of the fastest growing,” Carr said.

Part of its appeal is that there is little difference between sled hockey and stand up hockey in how the game is played. “It’s fast-paced and a full contact sport. The main difference is it’s played on a sled,” he said.

Sled hockey is a great form of exercise and fitness. It increases strength and coordination and also conditions the upper body. The balance used to propel, play the puck, and turn and stop gives arms, back and abdominal muscles a workout.  Those who play regularly quickly notice an increase in overall strength and balance both on and off the ice.

Necessity is the Mother of Invention
Sled hockey had its beginning in the early 1960s when some enterprising athletes at a physical rehabilitation center in Sweden wanted to play the game. The men modified a metal frame sled with two regular-sized ice hockey skate blades that allowed the puck to pass underneath. Their hockey sticks were round poles with bike handles.

The growth of the sport was slow to develop but by 1969, Stockholm had a five-team league that included both disAbled and able-bodied players. Ice sled hockey was first demonstrated at the Paralympic Winter Games in Sweden in 1976, and then again at the 1988 Innsbruck Paralympics. It became an official event at the 1994 Lillehammer Paralympics.

The game and equipment
Unless there is a penalty, there are six players for each team – three forwards, two defensemen, and a goalie. Substitutes may be made when play is stopped, or on the fly.  Previously, periods were 15 minutes in length, but this year they have been increased to 20 minutes, the same as stand up hockey. Play is on a regulation sized ice rink with standard size nets and puck. Checking and high-speed slapshots are common features of the sport.

Carr noted that sled hockey players typically own their own sleds for the best customized fit.  “Once someone gets into the sport, they want and need their own equipment,” he said. Players can get a basic hockey sled and pair of sticks for (approximately) $1,000.

Sleds are usually made of light-gauge aluminum, consisting of a customized “bucket” to sit in. A backrest can be used depending on the ability of the athlete. A frame supports the bucket, legs and feet, and is mounted on two skate blades attached under the bucket.  Athletes with double amputations tend to have an advantage here, since they can use shorter sleds with no leg supports, resulting in a smaller turn radius.

Instead of one hockey stick, players use two for propulsion, passing and shooting.  The sticks may be up to 100 cm long but are usually between 75-95 cm and can be wood, aluminum, or composite materials. The sticks have metal picks on one end for players to propel themselves.

“It helps if you have decent upper body strength and hand grip, but even then there are modifications and adaptations that can be made,” Carr said.  “Even those with limited grip can have sticks secured to their hands allowing them to participate.”

Players are outfitted with a hockey helmet, gloves, and body protection. Goalies wear basically the same equipment but do make modifications to the glove; metal picks are attached to the backside allowing the goalie to maneuver.