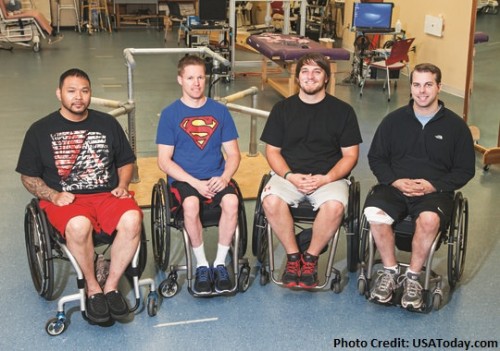 Four men who were told they could never move their legs again, now can.

The impressive work of a team of researchers at University of Louisville and UCLA has the potential to transform the lives of all people living with paralysis. In this experiment, using electrical current, the scientists were able to renew some signals that connect the legs and brain. The four men, who could not move their legs at all before the study, can now stand, flex and move their legs while the machine is turned on. These positive results bode well for future research in the field.

Paralysis may not last forever anymore. In an experiment hailed as “staggering,” a team of researchers at the University of Louisville and the University of California-Los Angeles restored some voluntary movement to four men who were told they would never move their legs again.

The finding, published online today by the journal Brain, upends understanding of the spinal cord and is likely to transform the lives of more than 1.2 million Americans who lack control over their lower limbs.

“The message here is that patients with spinal cord injury may no longer necessarily say it’s a sentence of complete, permanent paralysis,” said Roderic Pettigrew, director of the National Institute of Biomedical Imaging and Bioengineering, the federal agency that helped fund the research. “Spinal cord injury is devastating, but now there is hope.”

By coursing an electrical current through the four men’s spines, the research team, which included scientists from the Pavlov Institute of Physiology in Russia, appears to have “dialed up” signals between the brain and legs that were believed to have been completely lost.