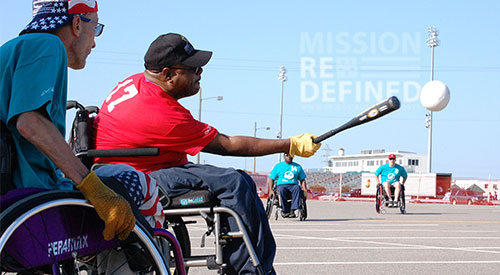 As the 32nd National Veterans Wheelchair Games came to a close in Richmond last year, speculation was already under way about what exhibition sports to present this year in Tampa. Four that were mentioned by Tom Brown, consultant to the Games for Paralyzed Veterans of America and former director of the Games for theDepartment of Veterans Affairss, were waterskiing, tennis, boccia, and fencing.

Tennis and waterskiing were selected. Boccia proved to be popular and accessible that the decision was made to offer it as a medal sport this year, waving the usual standard of having to be an exhibition sport for two years.

Tennis, according to Jeanene LeSure, local coordinator of the 33rd Games, has about 35 people signed up and ready to play.

Among the rules adaptations, players are allowed two bounces of the ball, but it must be returned before the third bounce. Serves are made with the server a stationary position but allowed one push before striking the ball. For a quadriplegic player, for which conventional methods for service are physically impossible, the player or an individual may drop the ball for the serve.

“It’s an exciting and physical game,” Brown said. “Athletes and fans will learn a lot about the sport at the exhibition.”

will also be presented. Participants use various adaptive skis, including a “sit-ski,” which requires less balancing, or discs or “saucers,” that assist beginners and individuals with varying degrees of disability.

LeSure said that in the preregistration period, only 50 slots were allotted and they went quickly. There is now a waiting list to fill any slot that may open up if a registrant drops out. The events take place at Lake Seminole Park on Monday, July 15 with half the participants beginning at 8 a.m. and the other half beginning at 1 p.m. Brown and LeSure agreed that it’s highly unlikely that waterskiing will ever make it as a medal sport because it is an option not available to many locations across the country, but they knew it would be an excellent event for Tampa.

Exhibition sports are chosen to expose veterans to different possibilities and to let them expand their knowledge of recreational activities. For those sports to make it as a regular medal sport (of which there are 18 now), it must receive a good response from participants, it must meet goals from a rehabilitative standpoint and it needs to be feasible in terms of logistics and availability. The third criterion is what most likely will keep waterskiing from becoming a medal sport; the feasibility in terms of logistics is still being explored with tennis.

“In terms of fitting in to our allotted time and making sure that matches don’t run too long, we’re still exploring all of that with tennis,” Brown said. “It’s more unpredictable as to how long a match can go. And we need to look at the tournament format to see how that could work for us.”

Fans as well as nonparticipating athletes are encouraged to attend the exhibitions and learn more about these two sports.