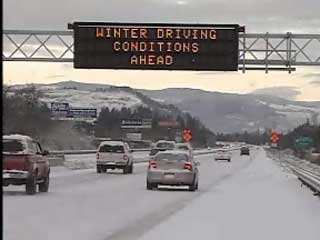 For anyone living in a northern state, Winter means rain, sleet, slush, snow and ice. Driving along icy roads is tricky at the best of times, and there’s not always a plow available to get your road clear in time to go to work for the day. Why not make your life a little easier now, by preparing your conversion van for the coming winter? You can do many small things before the snow starts to fall to make your winter that much easier to handle.

1. Get an oil change. Specifically, get the right sort of oil change. Oil won’t freeze in the kind of temperatures we see in the north, but it will get thicker. Thicker oil does a worse job of keeping your engine lubed up, which means more wear and tear on the moving parts you definitely don’t want to replace. Dirty oil gums up even worse, so get that oil changed before the temperatures drop.

2. Take steps to ensure visibility at all times. The most important and most neglected fluid for visibility is windshield washer fluid. Topping up that tank will save you plenty of headaches when you have to scrape frost off the glass or wait for a heater to melt it. A blast with wiper fluid and a few passes of the wipers will clear it right up. It helps if you clean your windshield inside as well. Of course, you should also have a good snowbrush and ice scraper stored away in the trunk or back seat.

3. Perk up your battery. The cold and wet conditions of a typical winter can wreak havoc on a battery. Connections will corrode and the batter may lose the ability to hold a charge. The older a battery is, the more likely you’ll run into issues along the way. Most auto shops can test your battery’s ability to hold a charge, and can tell you if you need a new one. Get it looked at before you end up stalled on the side of the freeway.

4. Check the belts and hoses in your engine. Belts and hoses are made of rubber and plastic, which tend to get brittle as they age. The addition of road salt and icy water splashing up onto them only makes the process faster. Take your conversion van in to have it services and pay special attention to the belts and hoses, so you don’t end up dropping fluid or finding a snapped belt while you drive.

5. Monitor your tire pressure. In wet and icy conditions, traction is key to keeping your conversion van on the road. Your tires are made to function best at a certain level of inflation, which varies depending on the tire. As the temperatures get colder, the pressure of the air in your tires will drop, at about 1 PSI per ten degrees. Keeping your tires inflated properly keeps them working as best they can.

6. Switch to snow tires, if applicable. Snow tires aren’t for everyone. If you live in the middle of the city and the roads are plowed several times a day, you probably don’t need a lot of extra traction from your tires. On the other hand, if you live in an area with plenty of hills and the plows come few and far between, winter tires might be a good option.

7. If you have four-wheel drive in your vehicle, test it out. Make sure the system engages smoothly. Since you probably don’t use the system much during the summer, it might have an issue that you don’t notice. Better to get it tested now than to discover it doesn’t work when you need it. Don’t forget to make sure that anyone driving your vehicle knows how to turn the system on and off. For new drivers experiencing their first winter in their parents’ conversion van, this can be all new.

8. Check your engine coolant. Most conversion vans run on something between pure antifreeze and a half and half mixture of antifreeze and water. Diluted antifreeze is perfectly fine. It would take ridiculously low temperatures to freeze even a half and half mixture, so there’s no sense in wasting half a gallon of coolant when you don’t need it. You can test the mixture of antifreeze yourself, or take it to a mechanic. Check to see if your vehicle uses a special kind of antifreeze as well. Just remember that if you replace your antifreeze yourself, you need to dispose of the old coolant properly. It’s harmful to the environment and illegal in most places to pour antifreeze down the drain.

9. Stock up on supplies and put together an emergency kit. In the event that something breaks and you’re stranded, having an emergency kit is a lifesaver. Here’s an idea of what you should have in your kit:

10. Don’t forget your training. All the tools and supplies in the world won’t help you if you don’t know what to do when you’re broken down. If you’re likely to be stranded for an extended period, light flares for the front and back of your vehicle. Run the engine and heater only for short durations to save gas. Wear your warm clothes to keep warm instead. To prevent your conversion van from freezing shut, crack the window slightly. If you have hard candies with you, you can munch on them to keep your mouth from drying out. Of course, make sure you have contact numbers and a way to call for help if you do end up stranded.